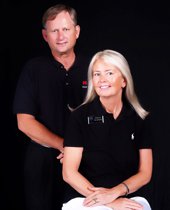 Hans accomplished nearly 20 years as a successful pharmacist-owner  in The Netherlands. He also owned an agency which was involved with importing and selling, US built sail and powerboats in the Netherlands and surrounding countries. Hans has traveled extensively, either for work or for leisure. He has sailed some extended trips, which included a TransAtlantic. Hans is also a  commercial pilot and he worked as such before finding his Real Estate career in the United States. Hans worked for Coldwell Banker before joining RE/ MAX in 2003 . Hans and Marilyn work as a team. Hans and Marilyn have been Windermere residents since 2004. Hans like to spend time playing golf, offshore fishing, camping and riding motorcycles.

Hans also likes to spend time in Canton NY with Marilyn, where they own a Christmas tree farm.

Welcome to Orlando Florida, also known as the City Beautiful. Come and enjoy the beauty and abundant wildlife of the St Johns River and Wekiva Springs. Spend the day swimming with dolphins, feed a stingray, or see a manatee up close while visiting Disney or SeaWorld. The greater Orlando area has so much to offer. Orlando is part of Orange County and it covers a vast area with many municipalities such as Windermere, Winter Garden, Apopka, Ocoee, Belle Isle, Winter Park and more. The Orlando area offers an abundance of fun and cultural events every single day, from museums, arts and culture, and world famous concert and theatre venues. Spend a day at Kennedy Space Center where you will be amazed. If you are looking to get your toes in the sand, the ocean is a short drive away. Or, if you are looking for action, take in an NBA game of basketball or Orlando City Soccer. Orlando is also home to some of the world's leading companies in technology, aerospace, logistics, and of course the famous theme parks. Orlando also offers a vast range of lifestyles. From inner-city homes in vibrant neighborhoods to historic locales, manicured golf course communities, suburban cities, and rural destinations. There are homes in Orlando for nearly any personality--all within a comfortable commuting distance to our bustling job markets and award-winning schools.